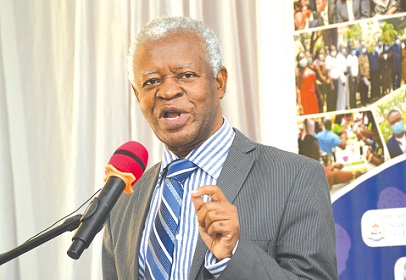 The Chief Executive (CEO) of the Mental Health Authority, Prof Akwasi Osei, has urged psychologists to change the discourse on mental health so that people see its relevance.

He said that while the country is currently doing well in understanding mental health issues, more needs to be done to let people know that there is a mental health aspect to everything that happens in society.

“We are doing well now,” he said, adding that “in the past, when something is wrong with the country or society, like murder, the immediate reaction is whether there is has a juju, witchcraft, ritual, or demons connection associated with the incident, but now those same people are going to ask what the connection is between sanity and the incident, and that’s very important.

The two-day conference, themed: “Developing Psychology and its Practice in the Post-Pandemic Future,” brought together senior psychologists and practitioners from Ghana and abroad, including the President of the Union pan-African psychology professor, Prof. Saths Cooper and Professor Christopher Charles Mate-Kole from the University of Ghana.

Professor Osei underscored the importance of psychologists reaching out to society to tell the story of mental health so that people know exactly what is going on and dispel any misconceptions they have about the disease.

He pointed out that not telling the stories had been one of the problems associated with mental health in the country and said he was happy that the association was at the forefront of mental health research and its connection with various problems occurring in the country. .

“Now mental health has come out of the dungeons into the public and the misconceptions people have about it are gone. Our ancestors, the early psychologists, went so far as to prove that it is not true that depression does not exist in Africa.

They have undergone what I call demysticism. They demystified psychiatry and mental health at the macro level. You and I need to go deeper at the micro level to dispel the myths people have about mental health,” he said.

Prof Osei, who is a former chief psychiatrist of the Ghana Health Service, said mental health and psychology were part of people’s daily lives and called for proper attention to be given to them.

In his keynote address, Professor Cooper urged psychologists to contribute significantly to a psychology that is relevant, truly universal and can serve all of humanity.

“If people don’t need psychology, psychology will die,” he said.

In a presentation, Professor Mate-Kole called for a change of dynamic in the teaching of psychology in schools, explaining that African cultural values ​​should be introduced there.

“If we don’t, psychology will run into genocide,” he said.

Ghana Psychology Board Deputy Registrar Anna Plange has revealed that the board will soon liaise with security agencies to help deal with people who do not have a license but pose as for psychologists.

She revealed that the council had recently closed the offices of some of these unlicensed psychologists.

From Paxton to Bellevue, Nebraska communities plan to ban abortion