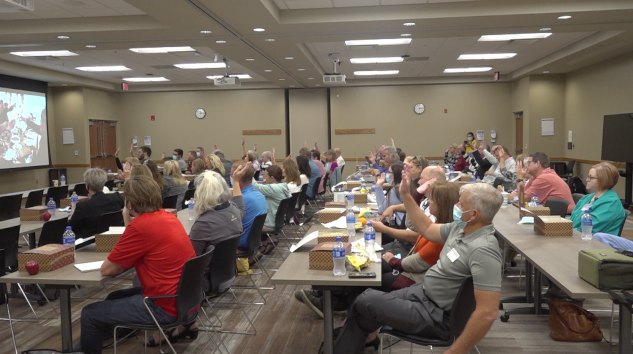 COLUMBUS, Neb. – A community in central Nebraska reflects on a healthier future.

“Coming out of this pandemic, this concept of well-being has never been more critical,” said Dan Buettner, vice president of the Blue Zones Project.

A timely health initiative in Columbus.

“Communities that are looking for a return story from this pandemic that attacks and strengthens underlying well-being,” Buettner said.

The Columbus Community Hospital hosted the Blue Zones on Tuesday.

It is an organization that partners with communities wishing to offer a healthier lifestyle.

“It ties into what we’re trying to do,” said Dr. Luke Lemke, chair of the Platte County Lifestyle Coalition. “So it seemed like a little dream to say that maybe Columbus could become a blue zone.”

If Columbus were a blue zone, the city would work with representatives to establish a personalized plan specifically for its residents. Although this is the first in Nebraska, the blue zones are present in more than 60 cities across the country.

“The blue areas go where we are asked,” said Buettner.

More than 75 community members came to discuss the possibility of a partnership, but the next steps will only be taken if the community leaders agree.

“Maybe we’ll kick off a few initiatives and see if it works and get the critical mass that we need in these areas, and then take the next step,” Dr Lemke said.

“Talk about community engagement, being part of a faith group and just trying to connect people on an interpersonal level,” said Dr. Lemke.

“We don’t stay here because there are big mountains, there is this beautiful beach, we come here for the people,” said Dr Lemke.

A poll was taken at the end of the presentation to help gather feedback on whether or not Blue Zones partnered with Columbus.

Pandemic Disrupted Preventive Health Care: Here’s How To Get Back On Track | Lifestyles