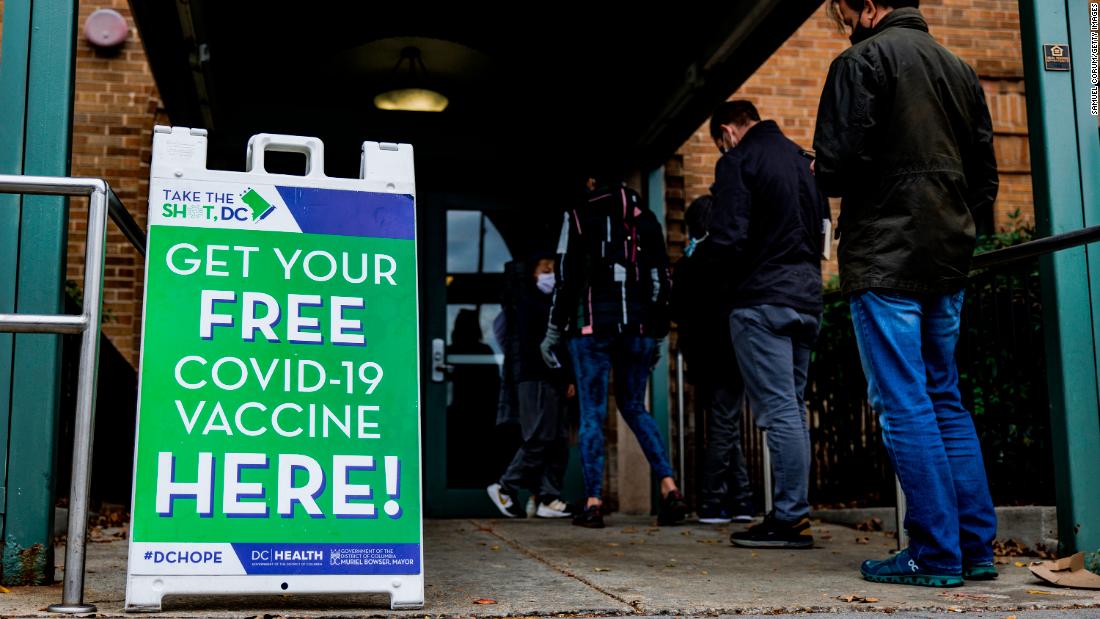 The United States registers an average of 118,717 new cases of Covid-19 every day – 40% more than a month ago – according to data from Johns Hopkins University, and 1,326 deaths from Covid-19 are reported every day on average. This is an increase of 12% from the previous month.

“Cases are increasing,” Dr Anthony Fauci told CNN’s Wolf Blitzer on Wednesday night. “We have an average of about 117,000 cases. We have an increase in the percentage of hospitalizations. The deaths are still over a thousand. Then you have, looking over your shoulder, the Omicron variant, which we know of, from what is happening in South Africa and the UK, is a highly transmissible virus. “

The increases come as the Omicron variant – which scientists believe to be more contagious, although most cases so far appear to be mild – is identified in a growing number of US states. Alabama and Kansas health officials on Thursday announced cases of Omicron in their states.

Experts such as Fauci, director of the National Institute of Allergy and Infectious Diseases, said it is likely that the Omicron variant will become the dominant strain, although the United States continues to struggle with the Delta variant. Omicron, however, has shown in other countries that “he has an extraordinary transmission capacity effectively and spread, ”Facui told ABC’s“ Good Morning America ”Thursday.

“It has what we call a doubling time of about three days,” he said, adding, “if you do the math on that… pretty soon it will be the dominant variant.”

“We’ve seen it in South Africa, we’re seeing it in the UK, and I’m absolutely sure that’s what we’re going to see here relatively soon,” he said.

Dr Jeanne Marrazzo, professor of infectious diseases at the University of Alabama at Birmingham, agreed. Based on what’s going on in the UK, she said, “we’re almost certainly going to be in what we’re already seeing, which is an early surge, or I should say an early stage of the surge that will probably be notified by Omicron. ”

Health officials stress importance of Covid-19 vaccines and booster shots. While there is “no doubt” that vaccinated individuals will be infected with Omicron, Fauci told Blitzer, “if you want to be optimally protected and get vaccinated, get a boost.”

The Covid-19 cases have prompted a number of colleges and universities to switch to online courses and exams and to cancel student gatherings and events: Princeton University, New York University, the Cornell University and Middlebury College in Vermont have announced in recent days that their fall semesters will end remotely following an increase in cases on their campuses.

In an email to the students on Wednesday, NYU provost Katherine Fleming said that a “dramatic acceleration in the rate of new cases” was “not a cause for alarm, but it is a cause of ‘worry, caution and appropriate action’.

Princeton University announced Wednesday that all undergraduate exams will move to a distance format to allow students to “leave campus as soon as possible.” Indoor gatherings where face coverings cannot be worn are also canceled or postponed until January 7, 2022.

The rise in the number of cases “has caused significant staff shortages, disruptions in the practice of the department and other challenges,” Assistant District Administrative Attorney Bonnie Sard said in a letter to staff.

It is not known how many staff members have tested positive, and a representative from the office did not elaborate on the impact of the outbreak. Those who tested positive should be quarantined, Sard said, and many staff in the affected department have been urged not to enter the office out of caution.

Several Broadway shows, including “Hamilton,” have canceled performances this week due to Covid-19. The cancellations come just weeks after the start of the reopening of shows following an extended hiatus from the pandemic. The announcement from “Hamilton” – which cited “groundbreaking cases of Covid-19” – came less than an hour before his 8 p.m. ET performance began Wednesday night.

The NFL on Wednesday acknowledged the rise in the number of cases among its players and teams, including the Cleveland Browns, who were due to host the Las Vegas Raiders on Saturday. Despite the growing number of players added to the Browns’ reserve roster, there are no plans to postpone the game, NFL commissioner Roger Goodell told reporters.

Separately, the NBA and the NHL have announced in recent days the postponement of games due to cases of Covid-19 or health and safety protocols.

Adams told CNN’s “New Day” Thursday that others should pay attention to professional sports, saying, “They really are a window into the spread of the community.”

“Kudos to the sports leagues because they actually do a fantastic job of watch testing,” Adams said. “And the rest of the country, we’re driving a car down a dark road with the headlights off while looking in the rearview mirror, and we hit a bump and we say what was it? surveillance right now for Covid. ”

The rise in infections and the specter of the Omicron variant have prompted federal health officials to once again urge Americans to get vaccinated and, if eligible, to receive their booster doses.

While this is reassuring, Omicron infections seem less severe, “this is only likely true if you are a healthy person who has been immune and ideally immune with three injections,” Dr Marrazzo told Kate Bolduan. from CNN Thursday.

“What we don’t know yet is what the degree of severe illness will be with this variant,” she said. “And we still have so many places that don’t even have over 50% primary immunization coverage, let alone booster coverage.”

Those vulnerable to the virus remain those who are not vaccinated, Fauci said, although he hopes that a potential increase caused by Omicron will prompt more people to get vaccinated. “We have the tools to be able to mitigate this. We just need to implement them.”

Many Americans seem to heed this advice: About 1.8 million doses of the vaccine were given each day over the past week, according to the U.S. Centers for Disease Control and Prevention. More than half of these doses were booster shots, and about 413,000 people get vaccinated each day.

However, with the boosters now widely available, officials are also debating what should qualify as “fully vaccinated” in the future. Currently, the federal government considers people to be fully immunized if they have received two doses of the Moderna or Pfizer / BioNTech vaccines, or a single dose of the Johnson & Johnson vaccine.

“In fact, I really think it’s important for people to understand that the CDC, the White House – many scientists have said it, most doctors have said it – need to change the definition of fully vaccinated, to especially for J&J, ”Adams said Thursday. .

This does not happen. CDC Director Dr Rochelle Walensky said on Wednesday that officials “continue to follow this science and that it literally evolves on a daily basis. And as this science evolves, we will continue to review the data and update update our recommendations if necessary “.

Fauci also called the definition of “fully vaccinated” a “semantic thing for regulation,” stressing that what’s important is that people get a booster.

Separately, the CDC’s advisory committee on immunization practices voted on Thursday to recommend the vaccines from Pfizer and Moderna over those from J&J. The committee’s vote came after hearing new data indicating that a rare blood clotting syndrome was more common in people who recently received a J&J vaccine than previously believed.