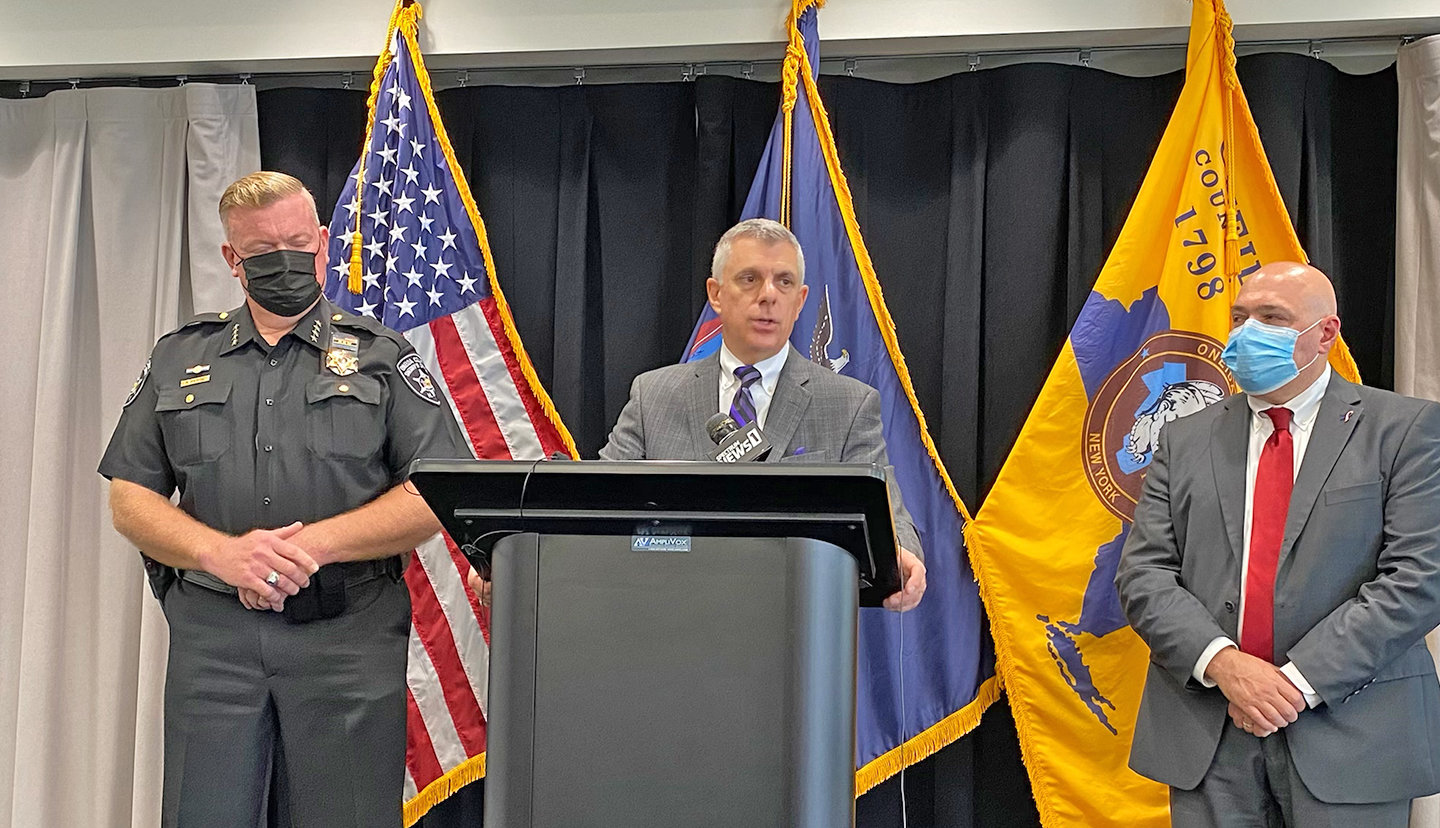 As part of International Overdose Awareness Day, the Oneida County Opioid Task Force unveiled a series of new initiatives to help the community cope with the opioid epidemic.

The new initiatives range from a series of emergency Narcan boxes to be placed throughout the community to a â€œboots on the groundâ€ response team for problem areas. The task force also launched a new website with resources for the community.

â€œEveryone has to be a part of this. We need community involvement, we need public attention, â€County Director Anthony J. Picente said Tuesday. He noted that the heroin and opioid epidemic is not just a problem in downtown Utica.

“There is not a single community in Oneida County that is exempt from this problem.”

The Oneida County Opioid Task Force was formed in 2016 as a multi-agency partnership that monitors drug overdoses across the county and provides assistance to users and their families. They are made up of law enforcement agencies, county health agencies, and third-party health and social service agencies.

â€œWe know that in many cases, and we have said it time and time again, drug addiction is not something that people seek to do,â€ Picente said. â€œSometimes it happens as a result of another illness or injury. It comes as a result of mental health issues. And it’s getting out of hand, unfortunately.

â€¢ A new website was launched at www.OCOpioidTaskForce.org. The website is publicly available and will keep track of overdose data across the county. It will announce peak alerts and provide weekly monitoring reports, all easily accessible to members of the public.

The website will also provide information on emergency response teams, public events related to overdose, and training offers for dealing with opioids in your family.

â€¢ Narcan emergency cabinets will be placed at various locations throughout the county for public use in the event of an emergency overdose. Similar to public use defibrillators, these white metal cabinets will be available to anyone who needs to help an overdose victim in an immediate emergency. The cabinets will contain two doses of Narcan or Naloxone nasal spray, along with instructions on how to use the spray. Picente noted that the boxes won’t have needles or complicated equipment, just a nasal spray similar to what people use for allergies and other common problems.

â€œThe priority is to deploy them in areas with a high opioid overdose load,â€ Picente said. “We hope to get as many of them out before the end of the year as possible.”

The boxes contain a QR code that can be scanned with a cell phone, which will tell the county that the box has been used and needs to be completed.

The county has ordered 100 boxes, which arrived this week alone, Picente noted. They have not yet placed any in the public. Businesses, churches, community centers, and anyone else who feels they need a box in their area can register on the new website, www.ocopioidtaskforce.org.

â€¢ A series of street engagement teams were formed from several counties and independent agencies to respond to overdose â€œhot spotsâ€ across the county. Hailed as â€œboots on the groundâ€ outreach activities, these street teams will travel to communities to establish individual ties with residents and families who are suffering.

â€œThey will meet people where they are, meet them one-on-one,â€ Picente said.

The teams will be made up of people from county agencies, such as the Department of Health and Department of Social Services, as well as ACR Health and other groups. Officials said they already had teams heading to Oneida Square in Utica and the village of Camden.

Sheriff Robert M. Maciol said on Tuesday he often meets critics of county outreach programs, and he noted that those critics are often people “lucky enough” not to have a family member or friend suffering from drug addiction.

â€œSo when someone overdoses or needs services to deal with an addiction problem, that person is someone’s son or daughter or mother or father or brother or sister. For me, it didn’t matter what brought them to this point, it didn’t matter what kind of life they came from. For me it is important that it is a human being. As the sheriff – and as long as I am the sheriff – the sheriff’s office will do everything in its power to save this life for the time being. “

Along with the new initiatives, the county also highlighted a series of ongoing programs being carried out by the task force.

There is a Post-Overdose Peer Awareness Program, in which trained ACR Health advocates will contact overdose survivors and their families within 72 hours of a reported overdose to offer further treatment and counseling for efforts. recovery.

The task force is also running a Leave Behind Naloxone program, in which police and emergency personnel have naloxone kits they leave behind for families at the scene of an overdose, to use in case of future overdoses. . The Rome and Camden Fire Departments recently joined the Leave Behind program, and officials have said they are looking to involve all police, fire and emergency departments in the county. The Sheriff’s Office, the Utica Fire Department and the Whitesboro Police Department have already joined.

The Task Force also offers overdose care kits that can be distributed to individuals and families at high risk of overdose. The kits contain basic supplies, such as water and alcohol wipes, as well as other overdose prevention resources.

â€œWe cannot stop our way out of this problem. We’ve said it from the start, â€Sheriff Maciol said.

â€œBut it’s also a critical part of the equation. We need law enforcement, we need to shut down the people who bring these things into our community. But we also need to think outside the box when it comes to getting our community and the people who are suffering back on track. “

At Tuesday’s event, county officials also reminded residents that Narcan and Naloxone are publicly available for yourself at pharmacies, and county health departments offer free training, both in person and virtually, on how to use the drug to stop an overdose.

There are also exemptions in criminal drug laws that prevent people from being charged and prosecuted if they are legitimately trying to help someone who is overdosed, even if you are involved in drugs yourself. .

Senator Markey, Representative Cartwright congratulates the Biden administration for responding to calls for a climate and health agenda