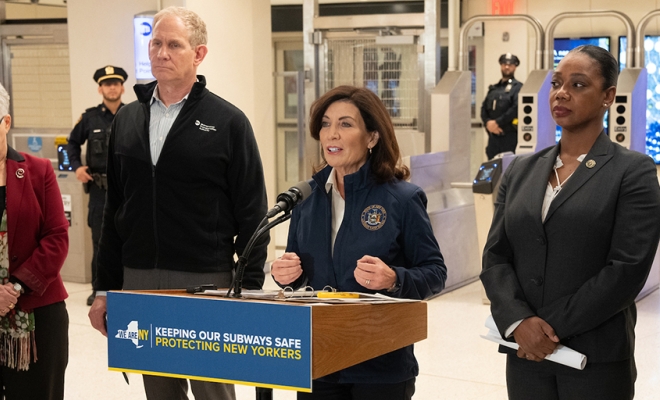 Increased presence of MTA police and NYPD officers
The MTA Police Department and NYPD will work together to strategically deploy more officers and increase their presence on platforms and trains, with MTA Police taking primary responsibility for policing subway stations. adjacent to and linked to the four major commuter rail hubs by deploying platoons of officers—providing a constant 24/7 presence—allowing the NYPD to increase coverage at additional stations in the subway system. The MTA Police Department’s coverage of 60 officers per day is equivalent to an additional 90 NYPD officers given the difference in shift lengths between departments.


With this additional NYPD presence and the additional support, the NYPD will significantly increase police presence in the transit system by approximately 1,200 additional hours each day, or approximately 10,000 additional hours. New Yorkers will see officers cover the platforms on extended rounds at at least 300 stations during peak hours. This increase in the number of agents will also allow dedicated transport agents to take hundreds of additional trains per day during peak hours. There will also be a substantial increase in officers at turnstiles who will enforce the law and deter fare evasion. Combined, this ubiquity of officers on the subway will help increase public safety and deter those planning to commit crimes.


This new program will include two new 25-bed inpatient units, with the first launching at the Manhattan Psychiatric Center (MPC) by November 1. The OMH is assessing the capacity of psychiatric hospitals downstate and will open a second unit early next year. Both units will serve people aged 18 or older with severe mental illness who are homeless, and MPC will partner with referral hospitals to accept patients who need to be medically stabilized. THU will accept referrals from a limited number of New York City hospitals and their Comprehensive Psychiatric Emergency Programs (CPEPs) and will increase the number of referral facilities.


THUs will be staffed with a multidisciplinary team of doctors, nurses, social workers, occupational therapists and other clinical and non-clinical staff and will provide recovery-oriented treatment. The programmatic model for THU will include an intensive focus on life management skills that will facilitate exit into the community, assist those who learn functional skills, and work with agencies inside and outside the OMH to improve engagement in mental health care.


The process of transitioning the care planning process for ULT patients in preparation for their return to the community will include an individualized assessment of the services needed to support stability in the community. A range of services will be available to support successful community integration.


As part of this new initiative, the OMH will develop a Transitional Community Residential Program to provide transitional space for people coming directly out of THUs. This short-term residential program will consist of 15 units across four sites for a total of 60 transitional beds and will provide service recipients with the opportunity to learn the skills needed to transition to more independent housing. Individuals will also be supported in achieving benefits to ensure long-term success.


Individuals in the Transition Program will be connected to Safe Options, Assertive Community Treatment and Intensive Mobile Treatment support teams to support their transition to the community and to permanent supportive housing within 120 days or less.

Chief of Police Presence Announcements
On-board subway announcements are another tool the MTA and NYPD use to deter crime and assist customers in need of law enforcement. In order to raise public awareness of the availability of the police – when present at stations and on platforms – officers will contact conductors to announce their presence.

Subway camera installation
The MTA system’s cameras have proven invaluable in identifying perpetrators and bringing them to justice. To that end, as Governor Hochul recently announced, the MTA is expanding camera coverage inside more than 6,500 subway cars, which will include installing cameras in subway cars at a rate of 750 cameras per month, following the completion of a process contract, until the entire metro car fleet is equipped with cameras at the end of 2024. Before that, 100 currently available cameras will be installed in the next few days in the subway cars. The MTA and NYPD continue to work hand-in-hand to ensure immediate access to cameras in the subway system.


Security Options Support Teams
Earlier this year, Governor Hochul and Mayor Adams announced that the OMH would launch Safe Options (SOS) Support Teams and deploy them to New York City. SOS Teams are made up of trained mental health professionals who coordinate with New York City-run Outreach Teams to engage with and support people who experience chronic homelessness. The teams connect individuals to essential support services and help secure placement in emergency or supportive housing programs. Since work began in April, the teams have registered 410 people in these services.

What is the most reliable predictor of your marathon time?