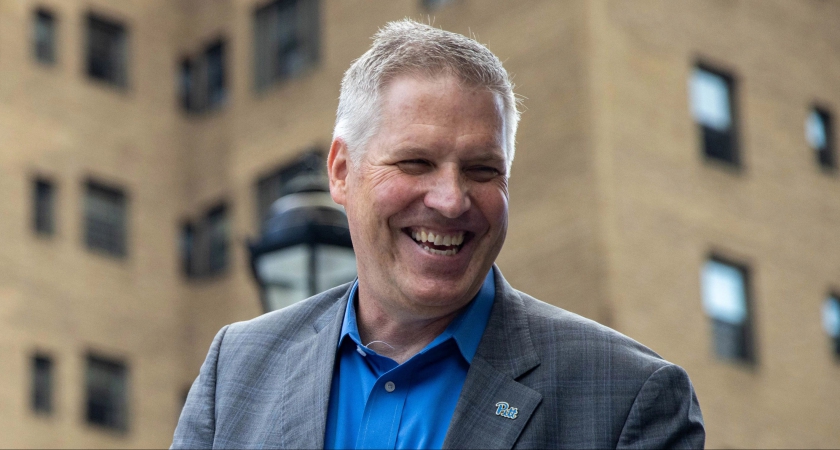 As he enters what will likely be his final year as Chancellor of Pitt, Patrick Gallagher looks to the future and hopes to wrap up some of the projects that have been launched under his tenure.

Gallagher announced in April that he would leave the position he had held since 2014 next summer and move to the faculty as a professor in the Department of Physics and Astronomy. He has a doctorate. in Pitt’s physics. The Board of Trustees is forming a search committee to find the University’s 19th Chancellor (see related article).

“It’s not about starting a bunch of stuff that was on my to-do list,” Gallagher said in an interview with the University Times. “It’s really about continuity and seeing a lot of things through to the end. We just have a lot – with the budget restart model, the new compensation package, BioForge.

He said he would like to “leave my successor as much positive momentum as possible. The best thing I can do is to leave the University in good shape, but – and above all – to move forward. What you don’t want to do in a transition is just start to tread water.

Gallagher spoke about a variety of issues during last week’s interview.

On Harrisburg and state funding

One of his biggest concerns for the coming year is the politics surrounding higher education. He would like to “find a way on some of the fiscal dynamics with Harrisburg and try to get us out of this annual tightrope exercise.”

“The budget battle worried me because it was taking place at the expense of all the students the bill supports. And our students should not be proxies in political battles,” he said. “I think we should be talking about funding and supporting educational opportunities for the citizens of Pennsylvania, and that’s not what it was about; it was about other things.

The underlying dynamic that led to clashes with some state lawmakers is still there, Gallagher said. “I don’t think anyone wants to go through that again. But I think if we don’t do anything to change the dynamic, that’s probably what will happen. I am interested in working with elected officials on both sides to see if there is a way to come to a new understanding that allows us to move forward without this kind of approach. … I wish I could give my successor a solution to this and not just pass on a problem.

The second five-year plan for Pitt was unveiled last year, and Gallagher said the initiatives it spawned are “pretty much where I expected” and some projects are really moving forward. “I think the fact that we’ve been able to do this despite a pandemic and a budget battle and all the other sorts of distractions that we’ve had is really quite remarkable.”

It’s no longer about crafting the plan, he said, but about “does it lead to the kind of ideas, initiatives and things to move forward.”

He particularly noted that the new budget model and “the shifting of the center of gravity of University leadership to the deans who run our schools, guide our graduate and professional enrollments, are, I believe, in full bloom and will really ahead.”

Some of the initiatives around Pitt as an anchor institution and supporting the surrounding community are doing quite well, he said. Other ideas are still in the planning stages but are progressing.

“I will say I’m always the most impatient person in the room, so I will always say we can do more and we can do it faster,” Gallagher said. “But the most honest and perhaps the most thoughtful answer is that I think it’s all good considering that some of them were quite mature and ready to go.”

To be a lame chancellor

“I don’t even know what that means,” Gallagher said. “The classic lame duck, of course, comes from a political background, where people are no longer afraid of the consequences and you sort of lose momentum. I don’t think universities work that way. We operate much more by seeking broad consensus, and the momentum just doesn’t depend on me and certainly doesn’t depend on power.

“I don’t think the lame duck look is a concern I have at all. … I want to respect the fact that, in all likelihood, someone else will run this university next year. And part of my job now is to make them as good as possible. And so it kind of changes your way of thinking. …You don’t want to start something now that you can’t close or start something that just creates an obligation or a hardship for your successor.

On people worried about the transition

Gallagher said he understands people’s fear of the unknown. “I think it’s just a natural uncertainty, and it’s structural, and it’s temporary,” he said.

“The benefit of these kinds of transitions is that we’re going to have a college-wide discussion about where Pitt is going, and it’s an opportunity to reflect on things that we’re doing very well and areas where we think we can do better and use that to try to identify someone who is going to be really helpful,” Gallagher said.

He noted that the new chancellor will not fill his shoes, just as Gallagher did not fill those of Mark Nordenberg. Instead, he said, it’s a relay race. “You want someone who is the best person to run the next leg of the relay, not the one we just did,” he said. “I tend to think of these (transitions) as real opportunities. …and you’ll get all the benefits of someone with new ideas and all that stuff happening as well.

He expects September to be a busy month as the search committee is formed and begins reaching out to the Pitt community for feedback.

On how to deal with COVID and other health issues

Since March 2020, all of Pitt’s health issues have been defined by the pandemic, Gallagher said, “and the truth is that the health and well-being of our community is affected by many other things.”

Now that the pandemic is turning into an endemic, the approach to COVID-19, like other mainstream health programs, is shifting to personal responsibility rather than institutional controls, the Chancellor said.

“I think and hope that we permanently leave in place a focal point for us to do health and wellness initiatives and efforts across the University and who can adapt to either great need, as was the case with the pandemic, or major opportunity,” he said.

He said Pitt was exploring the possibility of having a chief health and wellness officer who would be a focal point for university-wide efforts, whether it be mental health, stress. , sexual health, reproductive health, staying healthy during flu and cold season, vaccinations or need-related events like monkey pox and the new emergence of West Nile virus.

One area of ​​study that the pandemic sidelined was smoking and tobacco use on campus. Gallagher said just before the 2020 shutdown he had received a report on the subject with a lot of good ideas, and he would like to see more action on it.

“It’s a residential university, we live here. We want to thrive here and part of that is taking care of ourselves,” he said. “We all want to be at a university that can support that, and as a major medical university we should be able to take advantage of the wealth of expertise and talent that we have here. And I hope it won’t go away. I hope it’s a permanent part of Pitt.

“I’m going to deviate a bit on this one because they’re having discussions. I think maybe the worst thing I can do is sit on the sidelines and call balls and strikes as they try to work together,” Gallagher said.

“My expectations really haven’t changed. I think the stakes are really high here – it’s about our faculty. And I expect both parties to come to the table in a meaningful and diligent way and put the best interests of our faculty and our university first, and I just don’t see that I can help this dynamic by encouraging or providing racing commentary on the side.

“I’m confident that both sides are here for the right reason and doing the right thing. There’s going to be a lot of discussion coming up. I’m sure there will be different points of view to work through. from my experience in negotiations, negotiators need to have this trust with each other and the certainty that this is not distorted from the outside.

Do you have a story idea or a short story to share? To share with the University Times.