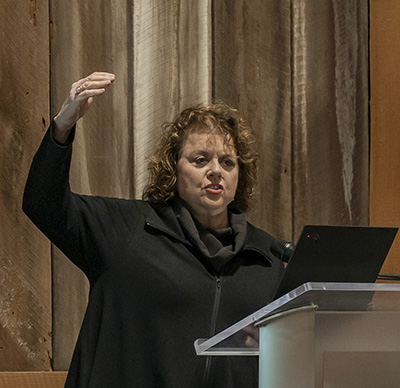 Laurie Garrett, UCSC alumnus, award-winning science writer and best-selling author, discussed the emergence of SARS-CoV-2, the national and global response to the pandemic, and the implications for future infectious disease outbreaks at a public lecture at the Hay Barn on Thursday 10 November.

Known for her deep knowledge of emerging diseases and public health, Garrett said she has become “deeply angry and disappointed with what has happened with COVID, not just in our country but around the world.” She went on to describe many missed opportunities to better control the pandemic and limit its impact, which, she said, “I fear it will be missed again with the next microbe and the next – and believe me, there will be a next, and a next, and a next.

Garrett’s books include The plague to come: emerging diseases in a world out of balance (1994), Betrayal of Trust: The Collapse of Global Public Health (2000), and I Heard the Sirens Cry: How Americans Responded to the 9/11 Attacks and Anthrax (2011). She received the Pulitzer Prize, the Peabody Prize and the Polk Prize (twice) for her work.

Chancellor Cynthia Larive introduced Garrett, noting that “his work reflects our deep, campus-wide commitment to social justice, science, truth, and community engagement, and his association with UC Santa Cruz is a a source of pride for me and for our campus”.

The event was sponsored by UCSC’s Global and Community Health Program. As the COVID-19 pandemic continues to disrupt people’s lives and the global economy, the need for strong local, national and global public health programs has never been more evident.

In his remarks, Garrett pointed to the devastating economic toll of the pandemic.

“They are now calling it the $16 trillion virus,” she said, referring to an estimate of the full cost of the pandemic by economists David Cutler and Lawrence Summers, published in the medical journal JAMA in 2020.

Could this have been avoided? Garrett outlined two possible scenarios for responding to COVID which she presented in April 2020 to heads of UN agencies. In the first scenario, she said, “the rich world takes care of itself” and vaccines are rolled out in rich countries first (which is essentially what happened). The uncontrolled circulation of the virus in unvaccinated populations would allow it to evolve, and new emerging strains would go back and forth between the northern hemisphere and the southern hemisphere. The result, she told them, would be “a permanent burden on the UN system, just like with HIV”.

The alternative scenario, Garrett said, would require effective disease surveillance and vaccination on a global scale. She described the technologies and policies needed to achieve this, including point-of-care diagnostic tools; universal and transparent access to information and data on infections and vaccination rates; an effective vaccine to block transmission and at an affordable price; funding to establish vaccine distribution infrastructure; identification of animals carrying the virus and closure of live animal markets; environmental monitoring to detect the virus; and effective communications to counter misinformation.

This second scenario of a global response to control the virus would also require the collaboration of China and the United States, and the UN leadership told him that was unlikely to happen, Garrett said. The problem, she said, is that “we lack any global governance that can protect human health.”

Garrett ended his prepared remarks by reiterating his call for an environmental surveillance system to detect emerging diseases. “We need a permanent, long-term way to know what’s going on in our environment,” she said.

Riley, noting that Garrett “has been making these calls for an early warning system to detect emerging infection threats since her first book,” asked how her perspective had evolved as she lived through the emergence of new diseases. In her response, Garrett sounded discouraged.

“Where we are now, the CDC has lost its reputation, and our own credibility as the mouthpiece for disease control has been undermined by the fact that the United States has the highest death rate. to the world, and we seem unable to act in any way in solidarity as a nation to fight COVID,” she said. “At this point, when I say we have to be there to fund surveillance, I feel there is less listening now than 20 years ago.”

Cortez asked Garrett to address “what we as educators can do” to prepare students to address these issues so that our public health systems can be better prepared to handle future emerging diseases. Garrett noted that “the financial incentives are all in the wrong place” and funding for public health is woefully inadequate.

“The interest is there among the kids – they want to be out there doing something meaningful, and global health appeals to them,” she said. “The problem is knowing who is going to finance them. Schools of public health should teach kids about Policy 101 – how to bring a bill to your city council. They must become adept at advocating for sustainable funding that will allow them to achieve their goals.

Riley said it aligns well with the goals of UCSC’s interdisciplinary global and community health program, which aims to equip students with a broad range of knowledge and skills by bringing together faculty from a range of disciplines, from social sciences to biomedicine.

As Chancellor Larive said in her opening remarks, “our goal is to educate a new generation of health leaders and workers with expertise drawn from a wide range of disciplines and able to communicate and learn from each other through a diversity of perspectives. . Through this interdisciplinary training, we hope to contribute to the health of all the communities, global and local, in which our students will work in the future.