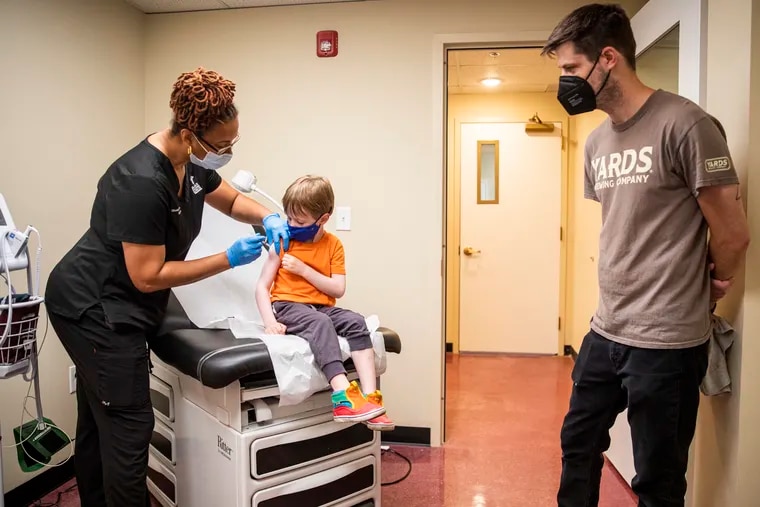 Racial inequities in vaccination reappear, this time among elementary-aged children in Philadelphia

The Black Doctors Consortium was among the first in the city to come up with newly approved COVID vaccines for young children in June, setting up clinics at its health center in a predominantly black neighborhood in North Philadelphia.

Despite the demographics of the neighborhood, most of the 100 families who showed up were white. When it comes to childhood vaccinations in Philadelphia, that’s not uncommon.

More than a year and a half since COVID vaccines became available, ensuring equitable access for all Philadelphians, regardless of race or income, remains a challenge. Demographic data for vaccinations in children under 5 years of age have not yet been collected, but among 5 to 11 years old, who have been eligible since last fall, about 37% of white children in Philadelphia are fully immunized, compared to 25% of Hispanic children and 22% of black children. Vaccination rates of Asian children are much higher than the rest of this age group – 57%.

Consortium staff stressed that getting any child vaccinated was a victory, but echo other experts who say that as attention to COVID has diminished, old inequalities are reasserting themselves.

“We have done our best to try to fill this gap,” said JaBaris Swain, a physician and one of the consortium’s medical directors. “I think the city and surrounding areas have a lot more ability to influence that than we do and I’m not sure I see that message getting across.”

Experts and health care providers in the city say government officials are showing less leadership on vaccinations, especially in efforts to get doses to children.

Philadelphia Department of Public Health officials, however, consider earlier, more visible approaches aimed at the general public to be less effective now. The best way to reach families, they say, is to have one-on-one conversations with caregivers.

“People who remain unvaccinated are unlikely to be persuaded by advertisements or the mere existence of a vaccination clinic nearby,” said Matt Rankin, spokesman for the health department. “They need the ability to have a one-on-one conversation with a health care provider they know.”

Vaccination remains the most effective tool to prevent serious illness and death from COVID. Although children are much less likely to develop severe COVID symptoms, they are capable of spreading it, which poses a risk to vulnerable, elderly parents. And the number of people under the age of 18 killed by COVID, approximately 1,250 since the beginning of the pandemic, are comparable to deaths from measles and worse than those from influenza or chickenpox.

But other hurdles impeding childhood immunization are similar to those that have hampered the immunization effort throughout the pandemic. While doses for adults are relatively easy to find, doses for children under 5 are less readily available. Under current federal regulations, pharmacies are not allowed to vaccinate children under 3 years old, and major drugstore chains require or recommend appointments for 3- and 4-year-olds. Misinformation and fear of the vaccine remain a major factor.

“Conspiracy theories that are being circulated on social media are the main stream of it,” said Cheryl Garfield, a community health worker at Penn Medicine, who said she still hears strange stories about the dangers of the vaccine from the part of the parents.

Rankin acknowledged that white and Asian residents have been quicker to get their children vaccinated, but noted that for children ages 5 to 11, doses are as readily available as for adults, so access is not not explain the disparity.

“We think it looks like distrust of the healthcare community continues to play a critical role in the early adoption of new vaccines,” Rankin said. “This has been found in survey after survey regarding the uptake of adult vaccines, and likely influences the confidence of black and Hispanic communities in pediatric vaccines.”

Throughout the vaccination effort, the health department has attempted to improve access and trust through measures such as offering first doses to people with high-risk conditions, raising awareness door-to-door and personal messaging, vaccination events ranging from mass clinics to popups, and messaging campaigns that included television ads from black and Hispanic healthcare workers.

The adult vaccination effort “has been almost 180,” said Ala Stanford, the pediatric surgeon who founded the Black Doctors COVID-19 Consortium, and now heads the regional office of the Department of Health and Human Services.

Now, the health department no longer hosts its own clinics, “although we can pivot at any time if needs exceed local capacity,” Rankin said. Instead, it focuses on pairing community organizations with city vaccine providers.

“It is no longer efficient to staff the number of clinics that we once did during the most critical times of the pandemic,” he said. “Most vaccinations at this stage take place in pharmacies and health care facilities like hospitals.”

The city is still running social media campaigns to promote vaccination, he said. But others say there is a lack of leadership, especially when it comes to vaccines for children.

“There aren’t enough people pushing residents to get their kids vaccinated yet,” said Quetcy Lozada, vice president of community engagement and organizing for Esperanza, a Hispanic community organization in the neighborhood of Hunting Park.

Ending terms and lower infection and death rates have made the virus less urgent, she noted, although the virus waned before resurging.

“As the city began to open up and people were able to return to their places of work and places of worship, and mask mandates began to become less and less necessary, the sense of urgency , I think, also became a bit relaxed,” she said.

Philly Counts, a community engagement unit under the city’s chief executive’s office, disputed that it had dropped vaccination awareness. This organization is still going door-to-door with residents, said Hassan Freeman, director of neighborhood engagement, and has coordinated with schools in the city to try to improve childhood immunization rates. About 37% of the city’s children aged 5 to 11 have received at least one dose of the vaccine, a rate that has not increased significantly in months.

Making time to vaccinate children can be difficult because parents and children are busy at school or at work for much of the day. And some parents are hesitant to take kids outside because of gun violence in their neighborhood.

“A lot of times it’s access and convenience,” Freeman said.

Other health workers have noted that vaccinating children may seem like a lower priority because children are out of school, away from camps, or with family during summer vacation. Others may not feel the need to vaccinate children because the virus is generally milder for children.

Philly Counts plans to hold about three children’s events a week throughout the summer in city parks, sometimes intended to accommodate the schedules of working parents. The events will offer dodgeball, kickball and vaccinations for children, Freeman said.

Esperanza is organizing a clinic at the Saint-Hugues de Cluny church on Tioga Avenue on July 9, a Saturday. The Black Doctors Consortium plans to hold clinics in July until 7 p.m. to attract working parents.

“It’s like baking a cake and finding out what will make the cake rise,” said Wood, the organization’s executive director. “It’s like luck finding the right place to bake the cake you want to eat.”

Great Minds: Hamish and Kyle – On mental health issues in the workplace