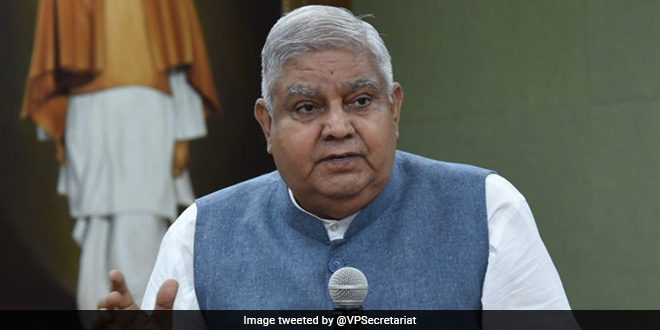 I am glad to know that NDTV-Dettol has launched another edition of its annual event, “Banega Swasth India”. I warmly congratulate NDTV-Dettol for this sublime annual initiative which strives to improve public awareness on critical health issues.

In the letter, he further stated that India, with the largest youth population in the world, is poised to become the third largest economy in the world within the next decade and that initiatives such as Banega Swasth India are therefore crucial. He said,

A healthy and skilled workforce is the prerequisite for such transformative growth. Therefore, initiatives such as “Banega Swasth India” are crucial in raising awareness and defining the political discourse among all stakeholders on the ground.

Highlighting the campaigns and initiatives the government has undertaken to build a healthier and healthier India, in the letter, Mr. Dhankhar added,

The government, for its part, has taken several commendable initiatives towards universal “swastya adhikar” for all citizens, including its flagship program, Ayushman Bharat, which has brought “health insurance” to millions of “poor families”. . While improving people’s access to quality tertiary care, simple grassroots interventions such as Swachh Bharat Mission also go a long way in reducing our disease burden and increasing productivity. India’s agile and multi-pronged approach to combating COVID-I9 has been appreciated across the world. With more than 278 million doses already administered, the country has successfully implemented the largest free Covid vaccination program in the world in record time.

Mr. Dhankhar highlighted the fact that health care has become a national priority. He added,

Concerted government interventions over the past few years have made health care a national priority and have led to sustained improvement in various health indices such as infant mortality rates, immunization coverage, institutional deliveries, among others.

Going forward, we must also focus our attention on containing the growing incidents of non-communicable diseases by raising awareness of these and other emerging “lifestyle diseases”. My best wishes to the management, staff and viewers of NDTV-Dettol for this initiative, I wish the show every success. Let us persevere together for the ideals of ‘Swasthya Lakshya, Swasthya Adhikar.’